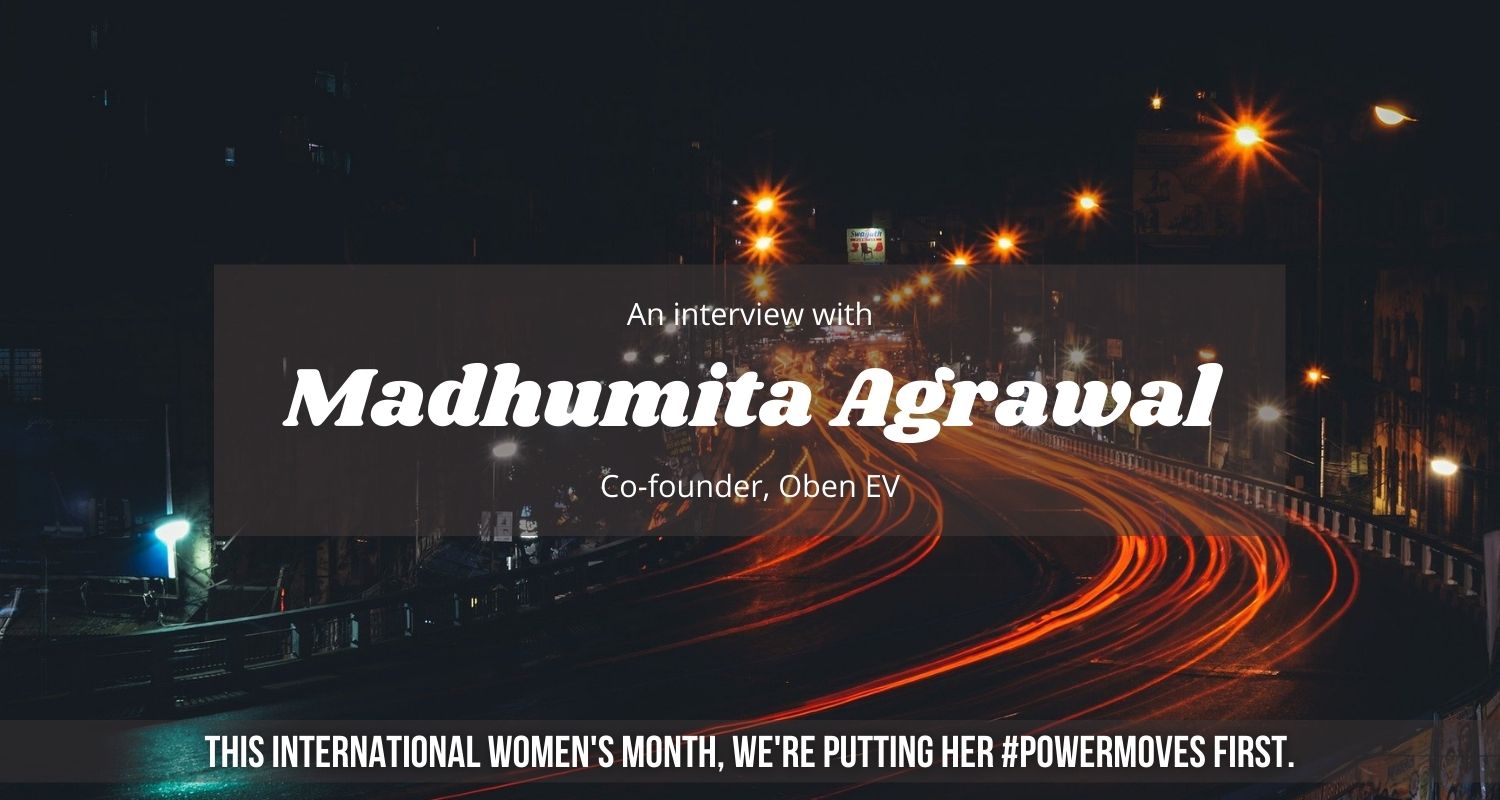 Oben Co-Founder Madhumita Agrawal talks to Jumpstart about the challenges and opportunities of the booming EV sector in India.

Electric Vehicles (EVs) have been around for more than half a decade in India. However, their penetration has lagged far behind their hype. But as more and more startups are cropping up to drive India towards a cleaner future, the demand for EVs is slowly starting to snowball.

Oben Electric Vehicle Private Limited is one such startup. Founded amid the pandemic in August 2020, Oben is a Bengaluru-based premium e-scooter and energy distribution company. The startup has already built a prototype and is aiming to complete the pre-production model next month.

Oben’s e-scooters have a premium build quality as well as design, Oben Co-founder Madhumita Agrawal tells Jumpstart. It has a speed of 90 kmph, a battery range of 130 kms and comes with a range of smart features.

Agrawal’s inspiration to enter the EV domain came while she was working at her first venture IPexcel, an innovation consulting firm. Founded in 2016, IPexcel helped a multitude of tech companies in developing new innovations and improving on existing ones.

As a part of IPexcel, Agrawal worked extensively with companies in the EV sector, especially in the last four years. This not only piqued her interest in the sector but also helped her understand the entire technology landscape and the problems within.

“I always wanted to build a product, get into a product segment, and as the first venture was getting automated, stable, I started developing an interest in EVs,” Agrawal recalls. “Looking at the future opportunity, it kind of helped me in making the decision that the next thing I want to do is get into electric vehicles.”

So, last February, Agrawal and her co-founder Dinkar Agrawal started brainstorming and researching the state of the EV industry in India. They decided to delve into e-scooters given the high traction in the Indian market.

Agrawal and Dinkar’s extensive research helped identify challenges to EV adoption in the country which were not being addressed by the current players in the market.

The problems were two-fold, explains Agrawal. First, the “bad quality” scooters which are being pushed into the market from outside India. Indian consumers are used to driving good quality scooters in the ICE segment. So, there is a need for good quality products in the EV segment, which are currently offered by only a few players.

Additionally, the current scooters in the market do not cater to Indian consumers. The vehicles are not made, Agrawal says, according to the available Indian anthropological data. For instance, the height of an Indian consumer is different from a Chinese consumer. This means that scooters manufactured outside India would pose ergonomics issues for consumers here.

The second bottleneck in EV adoption is the consumer hassles related to charging EVs. Hunting for charging locations and the long charging time often deters customers from EV ownership.

“You cannot just have a good product, but you have to build the entire ecosystem,” Agrawal says. “So, do I, as a business, wait for an ecosystem or what should I do?”

The team thus decided to solve these problems by developing a premium e-scooter.Premium scooters, Agrawal says, have better build quality and better designs. Oben’s scooters have a “contemporary, yet futuristic” design and has been built keeping in mind the changing design trends, she claims.

“As a consumer, for me to shift to EV, the experience has to be similar to what I was getting before or it has to be better,” says Agrawal. Therefore, Oben aims to provide customers with a similar or a better experience when compared to Internal Combustion Engine(ICE) vehicles, she adds.

According to Agrawal, “In terms of connectivity and smart features, [Oben scooters are] way ahead of ICE scooters.” She adds that the total cost of ownership for Oben scooters would be 30-40% lesser than ICE models.

India’s EV industry is currently at a nascent stage and the entire supply chain is being developed slowly, Agrawal says. While we have “a very strong automotive industry,” a lot of changes have to be incorporated to convert it to an EV industry, she adds.

One of the challenges the industry is facing is vendor availability. “[For] the battery, we are dependent on Korea and China,” Agrawal says. “We have to have the infrastructure for battery manufacturing within our country.”

Besides, India has a poor charging infrastructure. Even if there are EVs, there is a lack of charging stations. Agrawal says that a massive adoption can only happen if proper infrastructure is in place.

Another hurdle for EV adoption in India is the high upfront cost of the e-scooters. Some of the popular e-scooters in India cost around 60% higher than its ICE counterparts. In addition, the high battery replacement cost is yet another reason for subdued interest in e-scooters. However, with the increasing sales, as the unit economics is kicking in, the prices are slowly going down.

The industry slowed down when the pandemic hit last year but Agrawal says that things are picking up this year. In early January, Elon Musk’s Tesla incorporated its branch in Bengaluru.

“Tesla kind of putting manufacturing in Bangalore, it has put India on the global map, which is a very positive thing as an EV market,” Agrawal says. Conversely, she adds that it will take at least ten years for the industry to completely evolve.

Several other EV players are also manufacturing their products in India. Ola, for instance, is building the world’s largest e-scooter plant in Tamil Nadu’s Krishnagiri. The plant has an annual capacity of 10 million units.

In February, India’s Finance Minister Nirmala Sitharaman announced several crucial policies for the automotive sector as part of the Union Budget 2021. Among this was the voluntary vehicle scrappage policy, under which, those who scrap their old vehicle will be eligible for benefits and incentives when they purchase a new one.

“Consumers are now getting more conscious towards the environment, more businesses are moving towards sustainability,” Agrawal says. “I strongly believe that the scrapping policy will impact the EV industry with more adoption of EV.”

But despite these challenges, the market is estimated to grow in leaps and bounds. India’s EV market is expected to hit 6.34 million units in annual sales by 2027, growing at a CAGR of 44% between 2020 and 2027, according to a report by India Energy Storage Alliance (IESA). In 2019, the total EV sales in India stood at only 130,000 units.

Besides, sustainability is a growing concern among governments and consumers alike. The Government of India (GOI) has set a target of 30% electric vehicle adoption by 2030. If this target is met, it could save 474 million tonnes of oil equivalent and 846 million tonnes of net carbon emissions over the vehicles’ lifetime.

The burgeoning growth of this sector has also peaked investor interest. India is already an established hub for two-wheelers and automotive, and investments are picking up for EVs, says Agrawal.

“Investors are positively taking EV as the future [sic] and there is a wave,” Agrawal says. “On the macro level, the big OEMs (Original Equipment Manufacturers) are converting to 100% electric, policies are favoring, and there are subsidies. Investors are taking this in a positive way.”

Investments are also pouring in from international bodies and institutional VCs. The investors are taking the Indian market “seriously” and recognizing it as a “huge opportunity,” says Agrawal.

Being a serial entrepreneur and a woman in tech

For Agrawal, setting up both her ventures came with many challenges. The biggest were getting the right team—those who were passionate and whose vision aligned with that of the company— and getting the first customer. Additionally, being a woman entrepreneur came with its own hurdles.

“As a woman, people look at you with prejudice, unless and until you are pitching hard and making sense that, ‘Hey, I am here for business. And I’m serious. I am damn serious,’” Agrawal says.

Meanwhile, India still has a significant gender gap when it comes to women in the tech field. According to a 2019 report, only 34% of women are employed in the tech industry in the country. Another 2020 report indicates that women’s representation in tech could be as low as 18% in the country. The solution, Agrawal says, is to have more women in the workforce who take up responsibilities and deliver them.

“First of all, women have to be there in the workforce. Second, you have to deliver, you have to be updated with tech, you have to take up responsibilities and start delivering,” Agrawal says. “Then, you make yourself valuable that your boss or your colleagues definitely see that importance.”

The automotive field is highly male-dominated. For women aspiring to enter this field, Agrawal’s advice is to build confidence by improving the knowledge and expertise in the niche you want to create or be known for.

“We have to be a student for life to build [expertise]. It will not happen overnight, we have to work for it,” Agrawal says. “That will lead to your confidence in your workplace.”

Agrawal adds that as the automotive industry is more focused on hardware, women prefer to take up desk jobs than go on the field. This mindset has to change, she says.

“Women have to change the perception of the third party by delivering, by being at [sic] the field,” Agrawal says. “As women, we have to take the first step…Every employer wants a good performance employee. Once we deliver, I don’t see a problem.”

“[While] we have more responsibilities and we have a dream as well to build our own identity, we have to work for it,” she adds.