How Did Corporate Memphis Become Popular? And Why Do People Hate It? 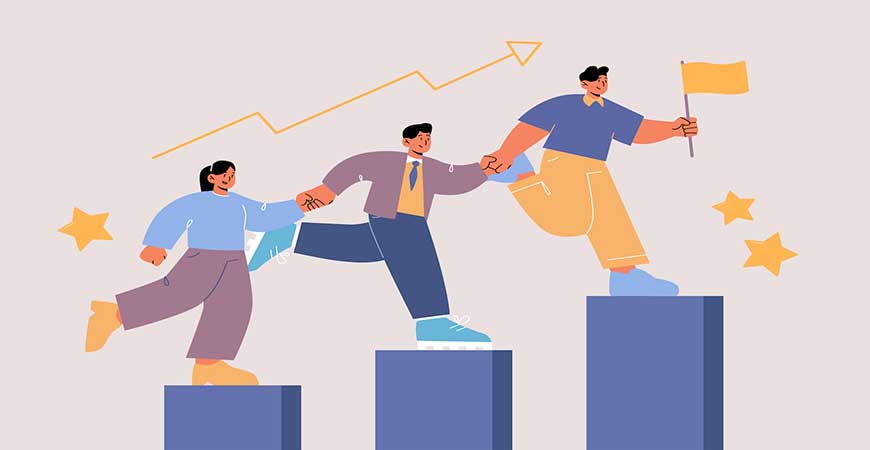 It’s a love-hate situation – here’s why Corporate Memphis became one of the most hated art forms.

In 2017, Facebook completely redesigned its entire illustration and system. It hired a Los Angeles-based creative agency, Buck, to develop an illustration system specifically for its platform. The team spent a year creating human-like cartoon figures made up of simple geometric shapes. Over the past few years, this vector-based flat art style has become increasingly popular in the corporate world as “Corporate Memphis”. Let’s take a closer look at this art style.

What is Corporate Memphis?

The set of illustrations, originally named Alegria (Spanish for “joy”), aims to convey relatable, everyday stories with simple shapes, flattened perspective and minimal line work. Alegria is known for its exaggerated human figures, which feature disproportionate bodies with bendy limbs and small heads. The characters are created with simple geometric shapes (vector graphics) and fixed perspectives. They are constantly in action, whether they are dancing, singing or running. They are never static. The colors are always bright and colorful to give off a cheery vibe, and most characters have unnatural skin tones, ranging from yellow and green to blue.

Rising popularity in the corporate world but hated by the public

Nowadays, Corporate Memphis has become the “definitive art style” for big tech companies and startups, particularly the FinTech and property sectors. For instance, big corporations, like Airbnb, Hinge, Airtable, Google and YouTube, have featured this new art style in their promotions, social media and websites.

There are several reasons why Corporate Memphis has gained so much popularity over the years in the corporate sectors and why the general public, particularly the art community, started to hate it.

Xoana Herrera, an illustrator who worked on the Buck team for Facebook’s redesign, says that the Alegria style was modified with the aim of ensuring replicability in mind during the production process. “The style originally started as something more intuitive and complex… But after different reviews, it started to shift towards something simpler to copy and implement.” The flat Alegria style has emerged as a plain, scalable and welcoming tactic to attract more people to tech companies.

Most corporations use this art style as space fillers to promote their brands or generate visual interest. Therefore, it is more important that different artists can animate and replicate the illustrations across platforms within a short period than to produce high-quality art pieces.

However, for that same reason, Corporate Memphis also signifies creative laziness and lacks artistic value. Art is supposed to be unique and different, while Corporate Memphis is meant to be replicated and manufactured easily. Because of this, the style receives a lot of hate, especially within the art community.

Companies are always seeking to attract customers to buy their products or use their services. Therefore, it is vital to create an inviting and approachable brand that everyone can resonate with. Corporate Memphis often uses bright and pastel color palettes that give a joyful vibe. Hence, when people walk past or scroll through these advertisement campaigns that feature Corporate Memphis, it has the right amount of detail to please its viewers. Tech writer Claire L. Evans points out that so many corporations adopt Corporate Memphis because it “makes big tech companies look friendly, approachable, and concerned with human-level interaction and community—which is largely the opposite of what they really are.”

But despite its cheerful vibe, Corporate Memphis still has a bad reputation and has an inseparable bond with corporations. Because of its cartoonish and lovable design, companies have begun to use Corporate Memphis to deceive and trick consumers into buying their products or using their service. For instance, companies often place Corporate Memphis in subscription terms, terms of use or privacy agreements. Therefore, people might lower their guards when they see a smiling character, creating a fake sense of comfort for them.

It may seem strange to use non-natural skin colors, like blue or purple, for the Corporate Memphis character. However, in 2022, companies are looking for ways to display how much they embrace racial diversity—and as much as possible. Therefore, the odd skin color is one way of representing everyone and making them feel included. If all the characters have unnatural skin tones and idiosyncratic body shapes, anyone can see themselves reflected in the characters.

Although this is an ethnically non-specific way of representing diversity, some have pointed out that it is just a type of token diversity that does not result in racial inclusion. The same disproportionate characters are just a lazy attempt to be diverse with homogenous character designs. It does not encourage racial diversity, and it dehumanizes people and reduces them into simple basic shapes.

While Corporate Memphis arts remain relatively the same, many illustrators have put their own spin on it. For instance, Jing Wei, a brand illustrator, uses a bright color palette for her art, and all of her characters have distinctive eye shapes and thick limbs.

So is Corporate Memphis art? It all depends on the context; if this art style is recreated by an artist who wants to put their own personal touches on it and use this art form to convey a meaning or a message, then yes. However, if this art is only replicated and mass-produced as a tool for companies to attract customers or increase sales, this is hardly showcasing the core value of art—uniqueness and creativity.