The Startup India initiative, launched under the leadership of Prime Minister Narendra Modi in January 2016, aims to promote the startup ecosystem in the country.

The Indian government’s ‘Startup India’ initiative has witnessed a 57.7% growth in the number of startups recognized by the government in 2020, according to the Startup India website.

The Startup India initiative, launched under the leadership of Prime Minister Narendra Modi in January 2016, aims to promote the startup ecosystem in the country.

From around 24,927 companies recognized as startups in November last year by the Department for Promotion of Industry and Internal Trade (DPIIT), the number has leaped to 39,321 startups as of November 9, 2020.

Under the initiative, recognized startups are provided with benefits such as self-certification, tax exemption, easy windup of business, startup patent application, and IPR protection, among other benefits.

A company is recognized as a startup depending on factors such as the company age, type, annual turnover, and its innovation and scalability, among others. The startups recognized by the program need to be less than a decade old, and annual turnover should not have exceeded INR 1 billion (US$13.5 million at current exchange rates) at any point during operations.

Furthermore, recognized startups should also work toward the development or improvement of a product, process, or service.

As outlined in its vision document last year, DPIIT had stated that it was aiming for 50,000 new startups and 2 million direct and indirect jobs created by 2024. In addition, it stated that 500 new incubators and accelerators, 100 innovation zones in urban local bodies, and seven research parks would be set up to help startups, according to The Financial Express.

Furthermore, the department had also proposed the allocation of a INR 100 billion (US$1.35 billion) Funds of Funds to the planned incubators. Along with this, it added that it would set up an India Startup Fund of INR 10 billion (US$135 million) for technology startups and another INR 10 billion in seed funding for startups.

As of February 18, 2020, the Small Industries Development Bank of India (SIDBI) had committed a little under a third of the Fund of Funds to 47 Alternative Investment Funds (AIFs) registered with the Securities and Exchange Board of India (SEBI).

Meanwhile, the Atal Innovation Mission (AIM), a flagship initiative of the Indian Government’s policy think-tank NITI Aayog, is creating a network of world-class Atal Incubators (AICs) in a bid to support early-stage startups and entrepreneurs. For each incubator, AIM gives a grant of up to INR 100 million (US$1.3 million) through a challenge application process.

As of March 30, 2020, AIM has identified 102 universities and institutions in which to set up AICs across 23 states in the country. Every four years, each AIC will foster the creation and nurturing of around 40-50 startups. Already, over 50 AICs are operational across the country with over 1200 operational startups, Business World reported.

In a similar vein, in order to facilitate product and service Innovations with national socio-economic impact, AIM has launched over 24 Atal New India Challenges (ANICs) in collaboration with various departments of the central government. Of nearly 1000 applications received, 52 winners have been selected to receive a grant of up to INR 10 million (US$130,000) to convert their innovations into commercial products.

Although India has the third-largest ecosystem in terms of the number of technology startups, the country’s rank fell six places in 2020 to rank 23rd in the Global Ecosystem Rankings 2020 curated by innovation mapping and research company StartupBlink. Furthermore, only four Indian cities – Bengaluru (rank 14), New Delhi (rank 15), Mumbai (rank 22), and Hyderabad (rank 96) – made it to the top 100 startup cities.

The report stated that while “India’s quantity and quality score are relatively high,” its “business score is far from impressive.”

As India continues to face some “some immense infrastructure problems” that affect entrepreneurs and startups, the report stated that the government should take additional steps to “improve this critical infrastructure and strengthen its startup ecosystem.”

The report added that “India has to focus on strengthening its top 3 cities” to improve its ranking, along with “helping more of its 35 other ranked cities to grow faster.”

“The potential is immense, and improving the business score with better regulation and infrastructure would be extremely helpful,” it added.

Meanwhile, two Indian cities – Bengaluru and Delhi – have made it to the top 40 of the world’s most favorable ecosystems to build a globally successful startup. According to ‘The Global Startup Ecosystem Report 2020’ by Startup Genome, Bengaluru ranks at the 26th position and Delhi is 36th among 270 ecosystems across over 100 countries. Mumbai has topped the “Top Emerging Ecosystems” rankings.

The collaboration will allow WhiteHat Jr students to send commands to a satellite operating in space, and also access data from it. Indian edtech startup WhiteHat Jr will be providing students with an opportunity to learn about space through a multi-year partnership with Bulgarian spacetech startup [...] 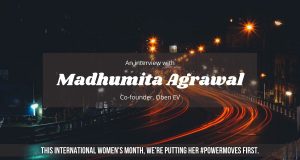 Oben Co-Founder Madhumita Agrawal talks to Jumpstart about the challenges and opportunities of the booming EV sector in India. Electric Vehicles (EVs) have been around for more than half a decade in India. However, their penetration has lagged far behind their hype. But as more and more startups [...]

Bluecat Paper Founder Kavya Madappa talks to Jumpstart about the need to adopt sustainable practices while making paper. Kavya Madappa has been running a spa resort in Coorg, Karnataka, for nearly 12 years. This meant that she had to extensively use paper for printing brochures, cards, and billing [...]