Both DST Global and GIC have previously funded Checkout.com

London-based payments fintech Checkout.com has raised $150 million in a Series B funding round, tripling its previous valuation to $5.5 billion, the company announced in a statement.

With the exception of Coatue, all of Checkout.com’s Series B backers have previously invested in the company.

Checkout.com will be using the fresh funding to support its cash flows, develop new products such as an upcoming payouts solution, and accelerate settlement time, the statement noted.

The $5.5bn valuation places Checkout.com with the likes of Revolut and Klarna, both of which are clients of the B2B startup, on the unicorn board. Southeast Asian startup Grab also features on Checkout.com’s client list.

“The way money moves into and out of businesses is changing rapidly. I believe that by solving financial complexity, you can radically unlock innovation–starting with digital payments,” CEO and Founder of Checkout.com Guillaume Pousaz said in the statement.

The company had earlier raised $230 million in a Series A last year. DST Global acted as the lead investor for the round with Insight Partners, while GIC and Blossom Capital participated.

GIC has also funded several Southeast Asian startups this year. Its most recent investments include Series D funding in Pagaya Investments for $102 million and Apeel Sciences’ for $250 million, as well as Amplitude’s $50 million Series E, all of which it led.

Further, GIC is also an investor in Kopi Kenangan, and participated in its $109 million Series B in May this year.

Remitting money overseas is necessary, but it doesn’t have to be risky By Ivy Lun If you’re a frequent user of digital remittance platforms, you may have noticed that the range of remittance methods available for use has grown considerably over the last few years. With COVID-19 restricting [...] 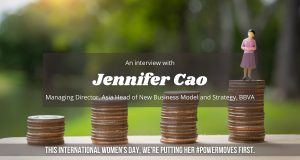 Asia Has a Financial Inclusion Problem, and It’s Especially Bad for Women

Hong Kong-based seasoned banker and investor Jennifer Cao talks to Jumpstart about the financial inclusion of women in Asia, and how supporting women in business can be part of the answer. The fintech space is thriving in Asia, from wealth management and trade financing, to buy-now-pay-later and [...]