The capital injection will help Nextbillion.ai explore new domains such as neuro-linguistic programming and facial recognition

Singapore-headquartered enterprise artificial intelligence (AI) solutions provider Nextbillion.ai has raised US$7 million in a Series A funding round led by Lightspeed Venture Partners and Falcon Edge Capital, barely five months after it was founded in January 2020, according to a report by Business Standard.

As part of the deal, Partner at Lightspeed Hemant Mohapatra, and Co-founder and Partner at Falcon Edge Capital Navroz Udwadia, will join the Board of Directors at Nextbillion.ai, according to Yahoo Finance.

The startup will use the fresh funds to grow its team, build vertical-specific AI-first capabilities, and enter new domains such as neuro-linguistic programming and facial recognition, for the ‘next billion user’ (NBU) markets, Livemint reports. NBU refers to a wave of new users who will be joining the global internet economy.

Nextbillion.ai was co-founded by three former Grab employees, Ajay Bulusu, Gaurav Bubna and Shaolin Zheng, at the start of the global Covid-19 crisis, and launched its AI-driven mapping solution that customizes application program interfaces (APIs) based on the size of the vehicles.

Further, he also said that the company sees “opportunity in building an inclusive world offering equal access to technology solutions in the most intelligent, secured and affordable manner,” in a statement to Livemint.

The company, which has a presence in India, China and Singapore, is looking to tap a largely unexplored area of helping companies market their products to NBUs. With a combined population of 2.5 billion people and growing internet penetration, India and China present just the right opportunity for the company, while Singapore serves as its tech hub.

“Emerging markets across the world are far more complex, with different languages, cultures, hyperlocal nuances and densely populated cities, than the developed markets. We see opportunity in these complexities,” Bubna told Livemint.

He also added that the company intends to move into several verticals “delivering world-class AI-powered solutions to our customers.”

Bubna also said that the company also has several pilots in the pipeline with enterprises and startups alike, and are looking to convert these into bigger contracts in the future.

“As a company we truly believe an AI-first approach can solve massive problems faced in the nextbillion user markets and we want to be at the forefront of it,” Bubna added.

Nextbillion.ai has onboarded engineers from global companies such as Alibaba, Tencent, TikTok and Google, to build AI-powered products. The startup is also working on a full stack AI labelling platform called Nextbillion Tasks.

The product decodes data and simplifies multilingual texts, image classification, and video annotations. It is also working to roll out products in the facial recognition segment.

AI technology represents several opportunities for startups like Nextbillion.ai, with revenues from the global AI market estimated to increase from around $10 billion in 2018 to $126 billion by 2025, according to market research company Tractica.

Most talked about business controversies of the previous decade

Misuse of technology, poor management and greed led to numerous corporate frauds in the past decade, leading to huge losses and damaged reputations. Over the

What impact do the Olympics have on a city’s economy?

According to professionals, the costs of hosting the Olympics outweigh the profits. Here’s why. After a year of waiting due to the Covid-19 pandemic, the

PropTech provides the technological advancements that the real estate industry needs to modernize itself. Industries across the world are introducing new tech-based solutions constantly to

Women in workspaces: key trends in gender and the labor market

Would Amazon Catapult Bitcoin into mainstream finance? Here we take a look into the recent series of events surrounding online retail giant Amazon – from 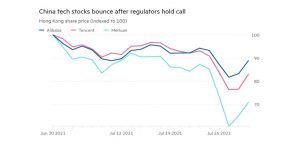