Tony Robbins: I Am Not Your Guru

Unleashing the skepticism within

Widely considered to be the most high-profile life coach today, there’s no escaping the name ‘Tony Robbins’ when browsing the self-help aisle. Tony Robbins: I Am Not Your Guru gives an inside look at his seminar, ‘Date With Destiny,’ which took place in Florida in 2014. Over 2,500 participants gathered to witness how Robbins could “change life in a moment.” The two-hour documentary condenses the six-day seminar, bringing the ‘Tony Robbins experience’ to the masses.

Directed by Joe Berlinger, an American filmmaker and a former attendee of the seminar, the film follows Robbins and his team as they plan for and execute the highly-anticipated event. Robbins began the seminar saying to the participants: “I didn’t come here to fix you because you’re not broken. Even if you think you are broken, I’m here to tell you and show you’re not.”

During the seminar, Robbins handpicked several participants to share their struggles in front of thousands of strangers, which always led to a tearful confession. They often revealed a personal trauma and took steps to heal, such as making a break-up phone call while on speaker mode. Robbins peeled away their heavily-guarded layers with calculated questions, eventually finding their deep-rooted problem.

Throughout the film, Robbins stresses that he is not a guru, but the documentary paints him as a healer in a broken world, possessing the ability to lead lost souls to the light. Although the documentary feels somewhat like an infomercial, it creates a mirror effect on the viewer, forcing them to reflect on their life.

Whether or not one considers life coaching to be a pseudoscience, it’s fascinating to witness how Robbins can uplift people and transform their lives for the better–insofar as it appears on film. Ultimately, the documentary explores how spectacle and a confident personality like Robbins can inspire people to change. The documentary is available to stream on Netflix. –JC 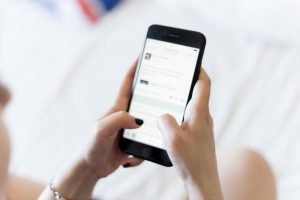 Let’s imagine a scenario where all your contacts are wiped from your phone, and the only way to recover them is to identify each person using your chat history. Most of us would do well; your brother always types ‘u’ instead of ‘you,’ your best friend always ends each message with an [...]

By Jasmine Chan Hilarious, bite-sized commentary Bill Simmons is a regular fixture in the American entertainment scene. He’s a sportswriter, author, talk show host, and the founder and CEO of the sports and pop culture website, The Ringer. Produced by The Ringer, The Hottest Take is Simmons’s [...]

By Kelly Cho A subtly provocative use of the podcast medium Moonface is a six-episode, independent audio drama created by James Kim, an established podcast producer based in Los Angeles. Kim’s life inspires the semi-autobiographical story: Paul is a Korean-American in his 20s who’s passionate [...]

Book Review: How to Get Filthy Rich in Rising Asia

If there’s any genre that the startup community collectively loves, it’s a self-help book, whether it be about negotiation or growth hacking. I am more of a fiction lover, so if I were to read any self-help book, Mohsin Hamid’s How to Get Filthy Rich in Rising Asia seemed like the right place [...]

Marketing a product in China is an endeavor that will send chills down any entrepreneur’s spine. The vast market, still full of untapped potential, is riddled with nuance when it comes to consumer behavior. Not only do companies have to make sense of marketing channels and trends to reach Chinese [...]